It's a real bummer you can't play my track. You could try to delete crowd.wav to see if that improves performance. I doubt it'll make any difference though.
47

That's very weird.
What are your PC specs? They surely can't be worse than mine

Turning down texture quality and turning of shaders, will help with performance.
49

Some big changes have been made to the heightmap to make the track easier:

Thanks to TFC for his outstanding stadium and over-under models. 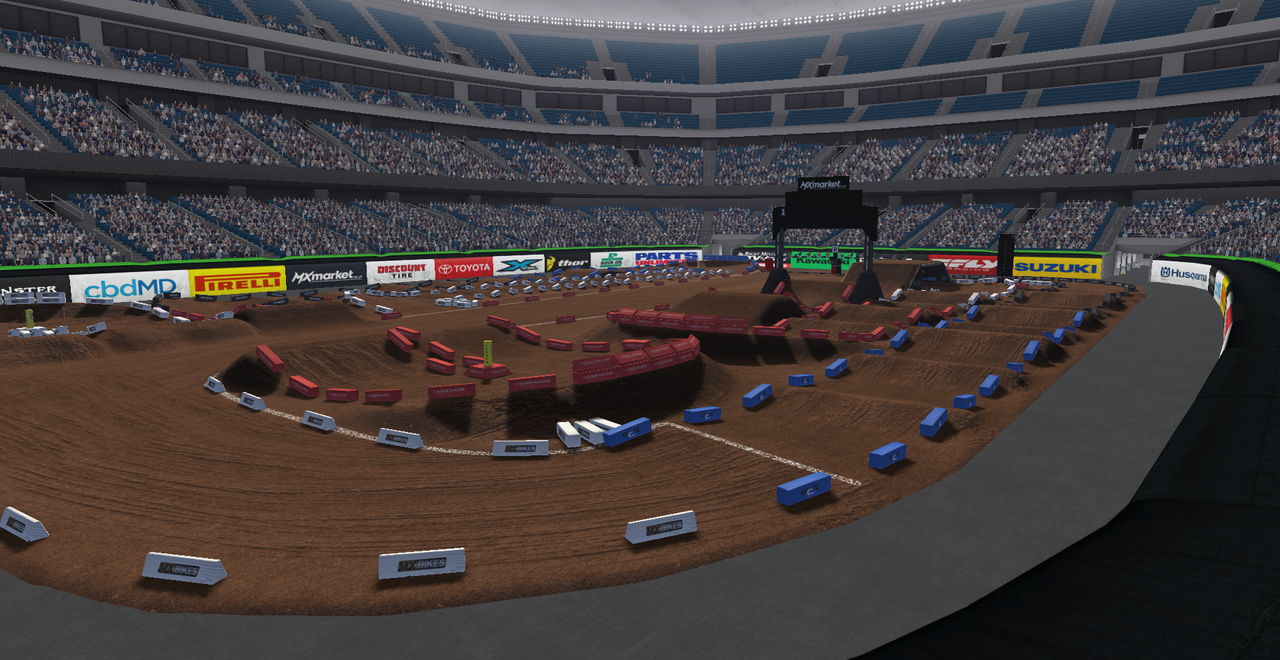 The track has a great layout, flow and overall style.
Phenomenal track, can't wait to see more from you!
52

March 10, 2020, 11:39:47 AM
Different types of materials give different rates of deformation. There isn't any way to make that faster for MP.
MXB also doesn't support terrain build-up yet.

You can however play around with soil and soft soil materials and masks to make your track start fresh and build up braking bumps.
53

Quote from: Resolute Kraken on March 05, 2020, 10:47:03 PMNow, the argument is, should it really be like this?  As a "simulator" should someone who sits stiff upright on a bike be able to have the same control as someone who uses their body weight?

No, someone who sits stiff upright shouldn't be able to have the same control and I don't think that's the case right now.
Using left / right rider lean does give you more control, and I wouldn't doubt it that if we really learn how to use the rider lean properly, we could use it to our advantage. However, I feel like rider left / right lean makes the game way more complex. This might not be a problem, but personally I don't want to spend the time learning how to properly control the rider as I don't have time for it.

There are some problems with the rider though. For one, standing up makes the bike less stable. Obviously that's due to a higher center of mass, and you could argue that we can counter the instability by using left / right rider lean. However, to make the bike more stable when standing up, the tiniest of rider movements are necessary. Due to MXB not being real life, we don't have the same feeling over the bike and terrain like we have in real life, thus using the rider left / right lean to counter the instability is practically impossible.
54

General Discussion / Re: PLease help me with the Terrain deformation

Suggestions and wishlist / Re: Jumping the gate

March 04, 2020, 06:58:53 PM
I completely agree.
Keep the jump start DQ for too much left/right movement but remove it for forward movement. We should get stuck in the gate (so the gate of the player stuck in it won't fall down until the player backs up to give the gate space to fall).
57

Quote from: rainey06au on February 29, 2020, 02:34:57 PMResolute Kraken, the materials listed here are for surface layers that are deformable.  As far as I can see Asphalt is a valid material for an object but not an environment surface layer.

Asphalt was a surface layer in the earlier betas. Deformation was a problem, but if you used the material on a completely black heightmap, you wouldn't get any deformation.
58

AFAIK the only difference is that the Steam version has automatic updates where the standalone doesn't.
Pages 1 2 3 4 5 6 ... 75